1. The traditional concept of beauty
When asked to reflect on the artefacts that surround us, people would probably make a distinction between two broad categories: one the one hand there exists things that are made in order to achieve a certain goal, on the other hand things are created in order to be beautiful, to induce an aesthetic feeling. Things in the first category are commonly referred to as ‘tool’, while the other type of thing is collectively known as ‘art’. An artwork, they are likely to say, has no other purpose than to be aesthetically pleasing, to be beautiful (though its beauty can be of a different kind than the beauty of the ordinary things that surround us – see Nehamas 2010, pp.1-3). Many people do not consider Duchamp’s Fountain or Schwitter’s Ursonate, to name but two examples, as genuine art because of their alleged lack of beauty. 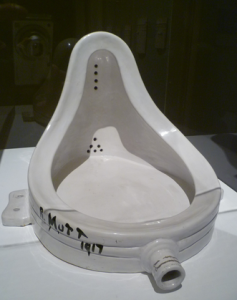 To consider aesthetic beauty as the alpha and omega as art is, however, a fairly new phenomenon – the term ‘aesthetic’ being coined as recently as 1776 by the Swiss Johann Sulzer (Talon-Hugon 2015, pp.124-6), while the word ‘Art’ itself (singular and with a capital) has been around for scarcely a century longer. As has been point out on numerous occasions, both Latin and Greek lack a term that corresponds to our contemporary notion of ‘art’. Instead of referring to artefacts, both the Latin ‘ars’ and the Greek ‘τέχνη’ describe activities that we would label under the term ‘craft’: the proficient and skilful use of tools and techniques. Though the resulting artefact was, of course, beautiful (a craftsman can hardly be considered skilful should this not be the case), it was never its sole purpose (Talon-Hugon 2014, 17-18).

All beautiful things, Plotinus wrote in the first century AD, produce ‘awe and shock of delight, passionate longing and a shudder of rapture’ (Enneads I.6.4). Beauty, as he saw it, is never restricted to artefacts (let alone a specific subset of artefacts); all things can be more of less beautiful, depending on their participation of the Idea of Beauty itself – the more of this Idea is present in it, the more beautiful the thing is. A philosophy he inherited, of course, from Plato, for whom observable beauty is but the first step on the stairs towards the ideal beauty – a beauty that is eternal, complete and immutable (Symposium, 211a). During the Middle Ages, this vertical metaphysics was christianised, and beauty became a transcendent property of things, with God, being the ultimate transcendental thing, became the Ultimate Beauty. By this same argument, the Ideas of the Good and the Truth found their ultimate source in God, which radicalised the Greek idea of kalokagathos, thus creating a fundamental unity of Beauty, Good, and Truth in the Highest, viz. God.

Such an eternal and immutable beauty cannot be considered to be only a subjective feeling things raise in us. Beauty is an objective property of beautiful things, being present even if nobody is observing it. Even if we sublunar humans experience this thing as more beautiful than that, or this thing more true than that, in (the transcendental) reality it is all one (as Saint Thomas writes in the Summa Theologicae). Humans are able to observe beauty, but they are not able to create it (Talon-Hugon 2014, 30). “Pour une orfèvre”, writes the French philosopher of art Talon-Hugon, “un peinture ou un sculpture, il ne s’agissait pas d’être original mais d’oeuvrer de la manière la plus parfait dans le respect des traditions.” (Talon-Hugon 2015, 90).

2. Subjective beauty
A number of social and scientific developments taking place during the sixteenth and the seventeenth centuries gradually changed this concept of an eternal and objective beauty. Prominent among those the scientific revolution that took place between both ends of this time-period, and which culminated in a newtonian, physical worldview. Such a worldview sees reality as ultimately consisting only of a void filled with colliding corpuscles in motion, being completely determined by the laws of gravitational force and other laws derived from it. In such a world, the only properties that can in reality be attributed to a thing are properties like its dimensions, motion, or shape; properties such as smell, colour, or taste enjoy only a secondary existence, being dependent on a well-positioned perceiver and not being part of the thing as it really is. Thus, the scientific worldview of the seventeenth century introduces a distinction between primary and secondary qualities of a thing. Where the ancients were convinced that the world was coloured in itself, the new science delegates the existence of colour squarely to the perceiving subject (Talon-Hugon 2015, 47).

This subjectivisation has an emancipatory effect on beautiful things, releasing them from their religious and righteous ties and letting them be only beautiful (op.cit.,50). When one denies the existence of objective beauty in the world, independent of a perceiver, the metaphysical necessity of the unity of beauty, truth and good disappears. Thus, things can be considered to be beautiful in their own right, without appeal to a greater good or a higher truth. This process came to a culmination in the second half of the seventeenth century, when the French poet Charles Perrault coined the term ‘beaux-arts’ to replace the traditional division of artes liberales and artes mechanicae. Here, we witness the introduction of ‘art’ in its modern sense: as human activities (and the result of such human activities) aimed only at creating beauty (Talon-Hugon 2014, 23-24).

The book by Charles Perrault is downloadable as pdf.

These widgets are displayed because you haven't added any widgets of your own yet. You can do so at Appearance > Widgets in the WordPress settings.

Theme by Anders Noren — Up ↑